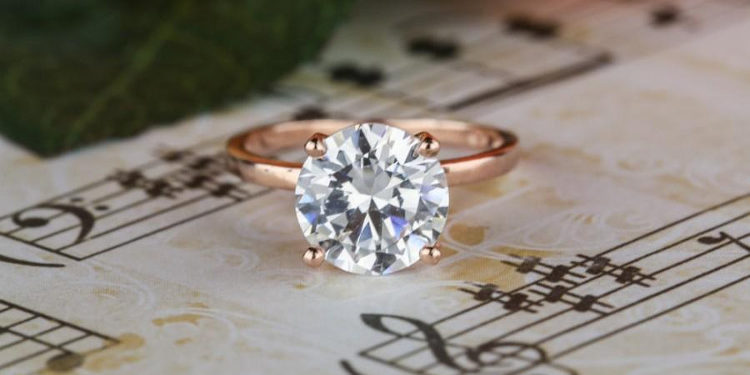 The oldest diamond finds come from India and was allegedly discovered in the 4th century BC. In ancient Greece, Plato mentions the hardness of the gem and Theophrastus describes its impressive crystal form. Myths and legends grew around these stones, to which magical powers are attributed. A diamond ring is something very special and conjures a glow in the eyes of every jewellery lover. A diamond ring as the name suggests is composed of a ring and one or more diamonds. The history of the diamond ring begins in the Renaissance.

In the 19th century, a diamond ring contained mainly coloured gemstones. For instance,sapphire or emerald. The diamond ring was often beaded at the beginning of the 20th century. The typical diamond ring, as we know it today, did not develop until the middle or end of the 20th century. The industrial revolution meant fortune for many. The prosperous businessman made public boasting of his newly acquired wealth by charging his wife with jewellery. Diamonds were priced more and more. In 1870, the offer matched to the demand thanks to the important discovery of the diamond mines of the African continent.


A Leap into Cultural Significance

Suddenly the symbol of social status that the diamond possessed was within the reach of a much wider public sector. Each time a greater number of young couples chose the diamond ring to seal their engagement, a ring that used to be a solitaire or a combination of several smaller stones. It was established by then that the bride could expect two rings: one, of engagement, with a gemstone set, and the current wedding ring, which in the Victorian era was no more than a thin gold ring. The commercial catalogues of the time show the immense variety of existing designs,some of which could be purchased for only two pounds. There are designs of solitaires, of half-rings, of double and simple clusters, of fans, of the panel, and of rings. However, until the twentieth century, the brilliance and power of the diamond were not fully revealed.

The rich new supply of rough diamonds influenced the design, and the setting lost the special attention it enjoyed in favour of the stone itself. The simple and immaculate diamond became the pinnacle of fashion. Tiffany, the famous New York jeweller’s firm, invented a spectacular open setting with a simple mint ring in which the stone was suspended by 6 tiny temples or platinum teeth, material that has the exceptional property of offering great resistance even when it has worked until it is very fine.

This setting allowed the exposed stone to emit the broadest set of lights from each of its facets. Unlike the old settings, which only exposed the surface of the stone and in which any imperfection went unnoticed, the Tiffany mount was an adequate method to test the quality of the diamond, giving a new importance to size, colour and the purity. Throughout this prosperous century, nobody enjoyed jewels more than Queen Victoria. She owned an immense collection and spent many thousands of pounds in her purchases to the jewellers of the Court. In 1850, her collection was crowned by the Koh-I-Noor (Mountain of light), which was then the largest diamond in the world and was given by the East India Company.

Probably one of the favourite pieces of Queen Victoria was a simple hoop decorated with a single diamond, a gift from her beloved Alberto four years after their marriage. Subsequently, Queen Victoria chose as an official engagement ring something less restrained: a ring in the shape of a snake. This type of ring was one of the favourite symbols of the 19th century. The rings of the animal, curved, forming a circle, represented eternity. Other more valuable versions wore the eyes and the head of diamonds. The nineteenth century witnessed momentous changes in the design of jewellery. First, the imaginative and delicate sentiment prevailed. During the 1860s, the docile pedestal woman came down from it to claim her right to vote and education and to demand new liberties; in just correspondence, the jewels became bigger, daring resounding. In the 20th century, the diamond ring has developed its full potential. The modern techniques of carving and polishing have managed to extract all the beauty of the stone in such a way that, given one of its facets, it radiates white light.

Modern materials have freed the diamond from the antiquated settings, opening completely new horizons to nineteenth-century artisans. With platinum as the only resource at hand, the jeweller was able to reduce the setting of the ring dramatically. The design focused more and more on the stone; the setting was reduced to the minimum expression; the decorative metaphors were relegated to the background. The diamond itself was all the necessary symbolism. The carvings became monuments of mathematical perfection: in the shape of emerald, square, rectangular, in the shape of pear set as solitary or in the cluster. For the modern millionaires a great solitaire colored or white, or with a diamond colored between two white stones would be a fashionable choice.The imaginative skills of twentieth-century designers continued to delight lovers with new and exquisite ways to present these romantic stones. As recently as 1981, the great German manufacturer Niessing invented the ring with tension settings in platinum, where the diamond floats as if magically suspended between two hoop halves.

Currently, the diamond engagement ring is something that many women around the world expect to receive someday in their life because it means that they found their ideal husband. That’s why choosing the right one is always important. The diamond ring represents the present, the past and the future. It became very fashionable at the beginning of the 21st century, but it is a trend that does not seem to be going away soon. We have already seen that in each epoch what changes are the way of exhibiting the stone.

A diamond is forever and despite its timeless nature have also been known to adapt to trends.